Concept Note of Speak out:
Crime against women mostly goes unnoticed, unreported or unregistered for reasons such as pressure from society/ community, self repenting, threats from the criminal, loose or no action from the police, no proper representation in the justice system and high legal fees. Hence the survivor is always at a loss and therefore is denied justice, when she is entitled to as a right by the government.
When we are looking at this grave situation which needs attention, Grassroot, Shillong and Catapult Shillong, has decided to take a firm initiative to curb this menace, and give women the financial support to pursue their cases in the Judiciary, considering the legal fees of good lawyers to be high where most times, the survivors and families are unable to afford legal fees.

2. Gala Night: This fund raiser will call upon members of the community to be a part of the social change and contribute towards the vision of the event. A fashion show depicting the lives of women and a musical event, keeping in mind the International Human Rights Day. The gala night hope to raise funds to enable the legal accessibility and judicial for and of women.

Introduction:
Grassroot a non- profit organization organized a debate competition on the topic, “Legalization of Prostitution” on 9th December 2016 at Dinam Hall Jaiaw , with an objective to enhance the understanding of the people on legal based issue and especially those faced by women survivors of violence.

The Debate started with the welcome address given by the President of Grassroot Miss Mayfereen Ryntathiang, and she also thanked the participants present during the event. Besides that, she also mentioned about the challenges faced by the women’s in our State by elaborate on the “Speak Out” programmed as an initiative and how it will be long term process to success if women start speaking out.
Following were the honorable chief guest and also the judges of the event:

The event would have not been a success without the participants, whereby the Students from different colleges came out with enthusiasm by sharing their views on the positive and ill effects for “Legalization of Prostitution”. Prostitution is the need to ensure rights to the commercial sex workers in term of health care and protection from all forms of violence. They also pointed out that if the profession is legalized it could also help in reducing the global concern on the spreading of HIV/AIDS, rape and also it will act as a new mode of earning for women who face financial, family issue and illiteracy especially in today generation where there is an increasing number of unemployed both in rural and urban areas. They also pointed out that countries like Sweden and Germany which have legalized the profession has positive response from commercial sex workers as they feel that such laws have empowered them to a great extend. They also spoke that if prostitution is legalized it will give a voice, protection and security in terms of law and they also puts stress on the fact that it’s time for a change, people should change their mentality and also legalizing it will help them to be more aware, educated and empowered and also believes that social morality is more important. On the other hand those opposed to the legalization of prostitution emphasized the need to find out ways and means to eradicate this activity which is considered as a taboo by the society.” The idea of legalization of prostitution is not a solution it will contradict the existing Immoral Trafficking Prevention Act(ITPA) and promote human trafficking(including Children) to boost the business. In fact, there should be a law to penalize people who pay for sex”. The participants Against the motion stressed on the point that the prostitution is not the only way of earning money and respect by supported his statement saying that “No Pain No Gain” added that it will influence other women or youth to make easy money by legalizing this profession and believes that every individual deserves to live a dignified life if legalized; it will give power to the dominant part of the society which would eventually lead to more crimes and violence. Lastly, the participant against the motion believes that social morality is more important. Participants of the Debate Competition

Later after the debate Shri Erwin Sutnga, advocate emphasized that the issue should be approached from a human point of view while pointing out that the existing Act is inadequate as the line between legal and illegalize blurred against those involved in the sex trade business.

The program has been a successful one with the presents of the participants by sharing their views on the positive and negative effect on the legalizing of prostitution in India. At the end of the debate competition the judges were decided to give the winners as a best speaker to the motion side where they came out with a strong points on why prostitution should be legalized in India and this debate competition is not about making a judgmental on who is right or wrong but is about coming together to bring changes in modern society. This concept will enhance a better understanding amongst students thus enabling our young mind to speak out and brush Violence against Women issues under the carpet. It also helps to build young minds to be more sensitive to policies and changes that need to prevent Violence against Women (VAW).

Profile of the Judges:
1. Shri. Manosh Das (Journalist): He is a journalist by profession. He started as Assistant Editor at the Apphira English Daily in Shillong, he was writing for various newspapers, including The Assam Tribune, The Sentinel and some magazines. He has been correspondent of The Times of India for 14 years now. He also on the panel of editors at the All India Radio, Shillong and have been hosting a live programme on current issues at the DDK Shillong.
2. Shri. Vivek Syiem
– Superintendent of Police City of the Government of Meghalaya. He is an MPS cadre of 2004 batch
3. Smt. Meena Kharkongor

-Joined Shillong Bar Association as a lawyer in 1994
-Assistant Public Prosecutor from 1998 to 2000.
-An Additional Public Prosecutor Fast Track Court from 2003-2006.
-2008 to 2009 as an additional Public Prosecutor East Khasi Hills
-2009-2011: Public Prosecutor, Jaintia Hills
-2011- 2014: Member State Women’s Commission and 2014 till date: Chairperson State Commission for Protection of Child Rights, Meghalaya
4. Shri. Erwin Syiem Sutnga: Mr. Erwin K. Syiem Sutnga is an Advocate practicing for the last 22years. He has held the post of public prosecutor, Jaintia Hills, held the post of public of vice Chairman Meghalaya state law commission helping in bringing out two books on traditional rights of the Khasi, Jaintia with special reference to land holding system. He is involved in social issues like addressing drugs addiction, tribal systems and is a student’s of the 6th schedule to the constitution of India. He is presently legal consultant to the KHADC and to the Executive Committee KHADC and is also looking after matters of the KHADC in the Supreme Court of India. He is deeply committed to working in the field of law and women’s rights especially tribal women’s rights.

The Report
Acknowledgement: our event could have not been a possibility without the generous support of the following:
Catapult team, for their tireless support and efforts technically and non-technically. For putting their heart and minds into the campaign from beginning till wherever our journeys can take us.

Daniel Syiem whose support came immediately after one phone call and responded so positively that the campaign took wings.
Kong Wanisha Lyngdoh whose support voluntarily came without asking. This can only speak of the commitment and passion towards the issue for which Grassroot is so proud to be associated with and hope to continue associating.
Impulse Social Enterprise Team whose commitment towards the event and the cause gave us momentum and breath to the process.
The rendition of the khasi traditional song from nongstoin college add more strength to the campaign. So thank you Nongstoin College for agreeing to be a part of us.

Thank you to the team of young volunteers from women’s college and the volunteers from different walks of life. You have all been so forthright in your support that Grassroot is very proud to have hosted a team of young social entrepreneurs who we hope go out in the world to make a change.
Our family, well wishers and different sponsors; humble gratitude to your tremendous support. Your prayers helped us build the campaign to where it was and will be.

The team of GRASSROOT. Your commitment, enthusiasm and positive energy aided the campaign to a new height.

Introduction: The 10th of December 2016 marked the event of the Gala Night-A FUND RAISER’. Grassroot and Catapult initiated the fundraiser calling upon members of the community to be a part of the social change and contribute towards the vision of the event. At the event, we saw the tremendous participation and contribution of many artists who came forward to support the cause and we are more than Grateful to them.
The event started at 5.00 o’clock in the evening and ended at 9.30 pm. The entire event was hosted by Mr. Dominic Byrne a volunteer from U.K. On that day, the following programmed started by a welcome address from Miss Catherine Kyndiah, District Programme Associate of Grassroot and followed by a welcome song given by a student from Women’s College Shillong.

Later, Ms. Mayfereen Ryntathiang, President of Grassroot gave an introduction about ‘Speak Out’ campaign. The Programme was followed by a documentary film on Violence against Women and after that followed by a fashion show, ‘A fashion show that depicts the empowered women whereby a clothe line from the weaver’s group of Impulse Social Enterprise and clothes from a renowned designer of shillong, Mr. Daniel Syiem were the highlight of the fashion Show. Live solo singers and bands contributed to the musical event singing songs of empowered women to RISE! . There are nine young brilliant models that contributed pro-bono to the ramp and confidently walked the ramp to show the different attires.
Fundraising stalls displaying, speak out bags, cups, batches, stickers, donors cards were set up to enable fund raising.
Conclusion: The two days campaign ended successfully! Though, it is the first time that Grassroot organized such a big event we have seen that this has been making a very fruitful one whereby every participant who came to the programme started to raise their voices about the issues faced by women in our society. Through this campaign it will also help them to be more aware about the legal access for the survivors of women and it also helps to build young minds to be more sensitive to policies and changes that need to prevent Violence Against Women (VAW). 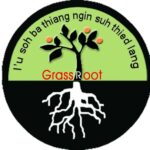